“What do you get if you win?” people often ask about these adventure rallies.  The second question, in response to my chuckle about winning, is always, “so this isn’t a race?”.  No, this isn’t the Gumball 3000.  This isn’t a Mad Mad Mad Mad World afterall.  There may be Smokey’s but I’m not the Bandit.

Take today for example.  If today were a WRC rally stage, I was the only driver, and I still lost.  Or I got lost.  But hey, I’m still waiting for my navigator.  I set out from Oslo with Vøringsfoss, Eidfjord, Norway in my sights.  I had conferred with a map in advance: head for the city center, take E-18 west, exit at E-16 towards Bergen and Vøringsfoss is on the way… err, kind of.  I was supposed to get onto E-7 at Hønefoss, but I had GPS turned off and didn’t get the reminder to do so as I was enthralled in the scenery of the drive.  About an hour later I checked my bearing and discovered my “mistake”  Oh well, at this point it was as long to turn back as to re-route and go around the long way… I’d only given myself a 3 hour detour (I thought).  Oops.

All around me are farms nestled in the valleys of steep mountains, with large, fast ice-melt rivers flowing to pass into my rear view.  Waterfalls occasionally gush over cliffs to add volume both physical and audible to the stream.  Altitude is climbing and as I crest the top of a hill a field of snow capped peaks jump up before me.

Seemingly abandoned ski resort villas replace the barns of the lower valley.  Am I in the Swiss Alps?  Perhaps I’m on that road again from Banff, Alberta to Whistler, B.C.  I could swear there was a familiarity to this place except for the astounding beauty of the “newness” that was overtaking me at every corner.  That was no wrong turn I took… it was fortune.  The essence of the journey and not the destination.  I couldn’t have been happier to be “lost”.

After a very rally-esque descent through winding and construction encumbered roads (don’t worry kids, I was safe, the back end never drifted and I observed all the posted speed limits) this route took me through a series of tunnels through the mountain.  The first couple felt like a Bond car chase… but then, I seem to be driving through a tunnel for, well several minutes at least.  Then I see the signs.  I’ve been in this tunnel for 4k and there are 21k more to go.  What?! A 25km long tunnel!  This is crazy talk.  Well, no turning back… I’m glad I’m no longer a 10 year old in the back seat holding my breath.  Two more kilometers and a blue glow lights up the end of the tunnel.  Surely this isn’t the end, the sign clearly indicated there are 19k more to go.  As the glow surrounds me, I enter a cavern of spectacular blue and yellow lights, 2-3x the size of the regular tunnel. It all whizes past at 80km/hour before I realize I should be filming this.  Ok, there are 19k more, they must have lit more than 1 cavern along the whole stretch.  I think at least one more an equal distance from the end has to exist.  There wasn’t one, there were two.  At the half way point I see the glow again!  Prepared, I flip on my video and whiz past the party cave again at 80km an hour.  At 19km I decide to pull over into the expanded cavern and stop to snap some photos.  The beauty is hard to describe, and I’m not sure the photos even do it justice.  For a while I am in solitude, until I hear a low rumble in the distance.  Like a timpani roll with soft mallets the rumble becomes a roar.  The wolves are here!  A semi trailer truck flies past and the troll growls chase it echoing down the tunnel.  Wow!  Ok, time to hit the road again. 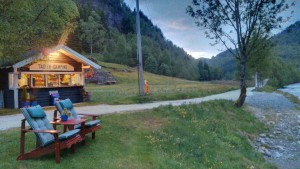 My 5 hour journey was soon 7, then 8… at some point here I was going to have to stop at one of the many camp grounds available, but it wasn’t even close to dark yet.  My intent was also to be fairly close to my proposed destination so I could visit before noon and still make my long drive south to Kristiansand.  Nine hours after my departure, at 11pm I finally pulled into a camp site to park and get some sleep.  Many of these sites are free, but this one looks like maybe you have to pay… oh well, I’m not exactly going to keep driving, so I inquire about the fee. Only $7, no problem.  In Norway, affordable is a rarity, so I stake it.  As I walk around and take some photos, the campground manger asks me about the rally stickers on the car.  Last year a Euro rally came through this area which included some Dutch boys.  There were also camping here some Dutch girls, who were convinced by the boys to change into bikinis and wash the cars for them.  Not bad work boys, not bad at all.  The manager then offered me a cabin for free! Electricity, WiFi, a bed!  Fortune again.

So now I set my computer to take advantage of these utilities and upload overnight while I catch some zzz’s.  Tomorrow I head south, and as the fortune of my mistake grows I even get to look forward to taking a ferry across one of the fjords because there is no bridge for the road.  I may have lost the rally stage today, but I beat the pants off the competition.