Being Tattooed In Tibet

We have both mentioned a couple times about people’s interest in my tattoo while here so I thought I would just go into a little bit more detail about that.

First, if you are reading and don’t know anything about my tattoo, it’s a work in progress that I have been seeing Bryan Griffith at Social Skins Tattoo for a couple years now. Originally I had “Ohm Mani Padme Hum” tattooed around my wrist with a Vajra (as it’s called in Hindi, or Dorje in Tibetan). This is a mantra that doesn’t have a direct translation into English, but is alternately a prayer for compassion for all sentient beings or a sum of all Buddhist teachings… but the explanation I like the best is that it is the sound of chanting it that will bring about compassion. As a musician there is something about the idea that sound brings about action that appeals to me. I knew I wanted more but wasn’t sure what so I thought about it for a year and decided to have a Tibetan mandala sleeve… So I worked with Bryan to make something work, not a literal translation of the image, but taking things from mandalas and thangkas (Tibetan paintings) that I liked and figuring out how to make them work on my skin. Mandalas are representations of the universe in Buddhist mythology and they come in three forms, physical three dimensional models (some of which we saw at Potala Palace), sand mandalas and paintings. The latter two are very colorful, and this color was what I wanted on my skin.

Before I left for this trip one of my Chinese friends told me that people would think I was a criminal because nobody has tattoos here.

Well, while people look at you in China just because you are foreign, we definitely noticed more staring than other travelers seemed to get when we arrived in Beijing. I think “criminal” is too strong, but people were definitely interested… Older people thought I was weird, but I did get some “cool!” comments from younger people. However I don’t think most people were aware of the subject matter of the tattoo… they just saw an arm covered in ink (save for a few Tibetan merchants at the dirt market who did notice and thought it was a great way to try to sell me their goods). 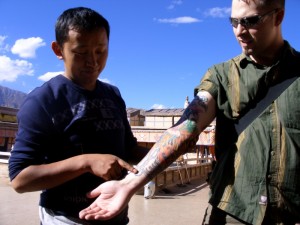 When we arrived in Lhasa it was a completely different story. I don’t know what I really expected, I just hoped I didn’t offend anybody. Far from it, people have been walking up to me and grabbing my arm and touching it to see if it is real.

Some people think it is paint and are kind of shocked when they find out it’s etched into my skin forever, but they always smile and express pleasure. Several people look at my wrist and say “dorje, dorje!” And one little girl grabbed my pinky to drag me down the market so she could show her friends. I’ve only had great responses from locals and monks. I have been so pleased with how the tattoo looks and what it means to me personally, but now that I’ve received this response I’m happier than ever about the effect it’s had on my life and can’t wait to have it completed!