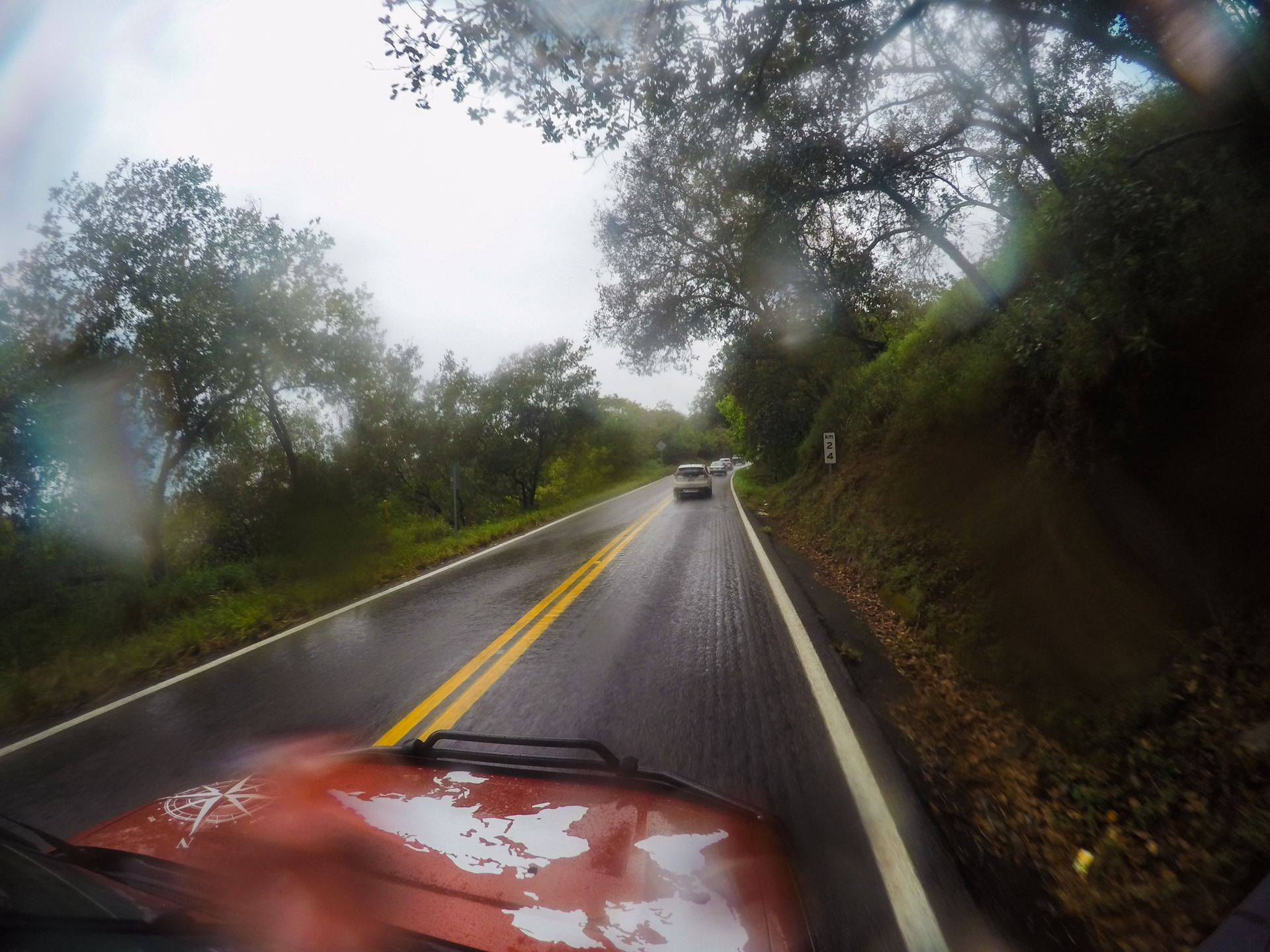 With revived spirits, having just made new friends, we were a little sad to leave Ernesto and Taisa behind to replace one of their spare tires in Mazatlan as we immediately made our way south from the ferry terminal, but we had close friends from Seattle to meet up with in Puerto Vallarta… or so we thought.

Having no desire to spend more time in the Mexican state of Sinaloa than necessary nor wanting to arrive at our destination too late and end up driving at night, we sped down expensive toll roads, a.k.a. “cuotas”, trying to make quick work of more than 400 kilometers to Puerto Vallarta. Good roads made for an uneventful if rather long and boring drive, but by happy hour we were in Sayulita, where we stopped to give Sophie a break from the car, give ourselves some tasty margaritas, and stretch all of our legs along the beach. Not too much later we were settling into a beautiful apartment upstairs from an Italian restaurant just a few blocks from the beach in Puerto Vallarta. As we unpacked and reconnected with the world outside of our long day in the car, we discovered that a tropical storm we had heard about as we were leaving Mazatlan had spent the day turning itself into Hurricane Patricia. And Patty was shaping up to be an intense event, aiming herself just south somewhere between Manzanillo and Puerto Vallarta. What luck!

Concerned, we asked Michel, the owner of our apartment and the restuarant downstairs, if a hurricane like this had hit PV before, and what precautions he might be taking. He was basically not worried in the least. “We are naturally protected in this bay,” Michel said. “The storm isn’t going to do any damage,” he insisted. Bolstered by the facts that the building was situated on a hill, our car parked above where we imagined flooding might occur, and our apartment was on the 3rd floor, I also felt quite relaxed about the whole situation and figured at least we had a comfortable place to wait out the storm. We strolled down the charming old streets of Zona Romantica and found a nice spot to eat dinner. Upon returning to the apartment however, our relaxation began to fray as owners were boarding up storefronts, and the lady across the street from us frantically applied tape to all her windows. Uhhh… just how cool should we play this? I tried to be reassuring, but Kim and I agreed to wake up early and re-assess the situation. It was already dark afterall, and we certainly weren’t driving anywhere until daylight, might as well get a good night’s sleep and track Patricia’s progress in the morning.

Oh what progress! Overnight, Hurricane Patricia picked up strength, became classified category 5, and predictions were being made of one of the most damaging storms to hit the Pacific coast of Mexico in 100 years. We woke up to text messages from Ernesto urging us not to stay in PV, to get out, go anywhere! Aghhh! We didn’t want to head inland towards Guadalajara, as the path of the storm was likely to follow to the east after making landfall. So, back to Mazatlan for us! We actually were up pretty early and able to get a head start on the traffic out of town, but Google Maps’ suggested fastest route was really the “straightest” route, and ended up directing us towards unpaved roads, so we had to turn around and backtrack to the route 200 which leads to Tepic and joins the 15D cuotas back to Mazatlan. This backtracking cost us valuable time, and we became mired in traffic on the 200, with everybody fleeing Puerto Vallarta like it was the end of the world. Hotels were evacuating to nearby towns. Another friend of ours from Seattle visiting Puerto Vallarta for a wedding was put on a bus heading for nearby Mascota. Military, ambulances and trucks with fresh water were coming in as every civilian was being carted away. It is challanging to stay calm when the news, your friends, your family, are all freaking out and wanting to know that you’re out of harms way, but we slowly pushed along in the flow of traffic for a few hours, the storm gradually picking up steam and chasing our tail. When traffic finally broke and we felt safely and quickly on our way north, we had seen many emergency vehicles heading the opposite direction and the wind and rain conspired to instill urgency, but we hadn’t really experienced anything quite yet like an actual hurricane. Several more hours on the cuotas, which mercifully were opened up toll free to expedite the evacuation, and we found ourselves back in the company of Ernesto and Taisa at a campground in the middle of Mazatlan. Joining them were overland travelers Chloe and Toby, who were winding down on over 2 years on the road in Central and South America with their dog Tia, heading back north towards Baja and then home in the US beyond. Overlander welcoming party!

The following day, after Patricia had her chance to do her worst, it turns out Michel was right (or lucky). Predicted to be the most dangerous storm in a century, Patty made landfall and mostly petered out. Ironically the town of Mascota, host to our evacuated friend from Seattle, got some of the worst rain, experienced power loss and some flooding, but that was about it. No major damage. No devastating loss of life. Thankfully. The response of Mexican government was rapid and impressive, and we still felt it was worth evacuating based on the previous day’s prediction, but fortunately it mostly amounted to nothing. Unfortunately for the crew we were meant to spend the week with in Puerto Vallarta, the airline canceled their flight and they lost their hotel reservation, forcing them to reschedule their vacation. Disappointed we would miss our dear friends from Seattle, it was no small consolation that we were back in the excellent company of Ernesto and Taisa, and making more new friends as well with Toby and Chloe. We decided to wait at least a day to make sure the roads back to Puerto Vallarta were clear before returning. Several tasty meals were enjoyed. Tips, tricks, jokes and travel stories shared. Once again we didn’t end up where we thought we would, but we landed on our feet, and appreciated our good fortune despite our expectations.

It turns out it is true what they say… every cloud does have a silver lining.