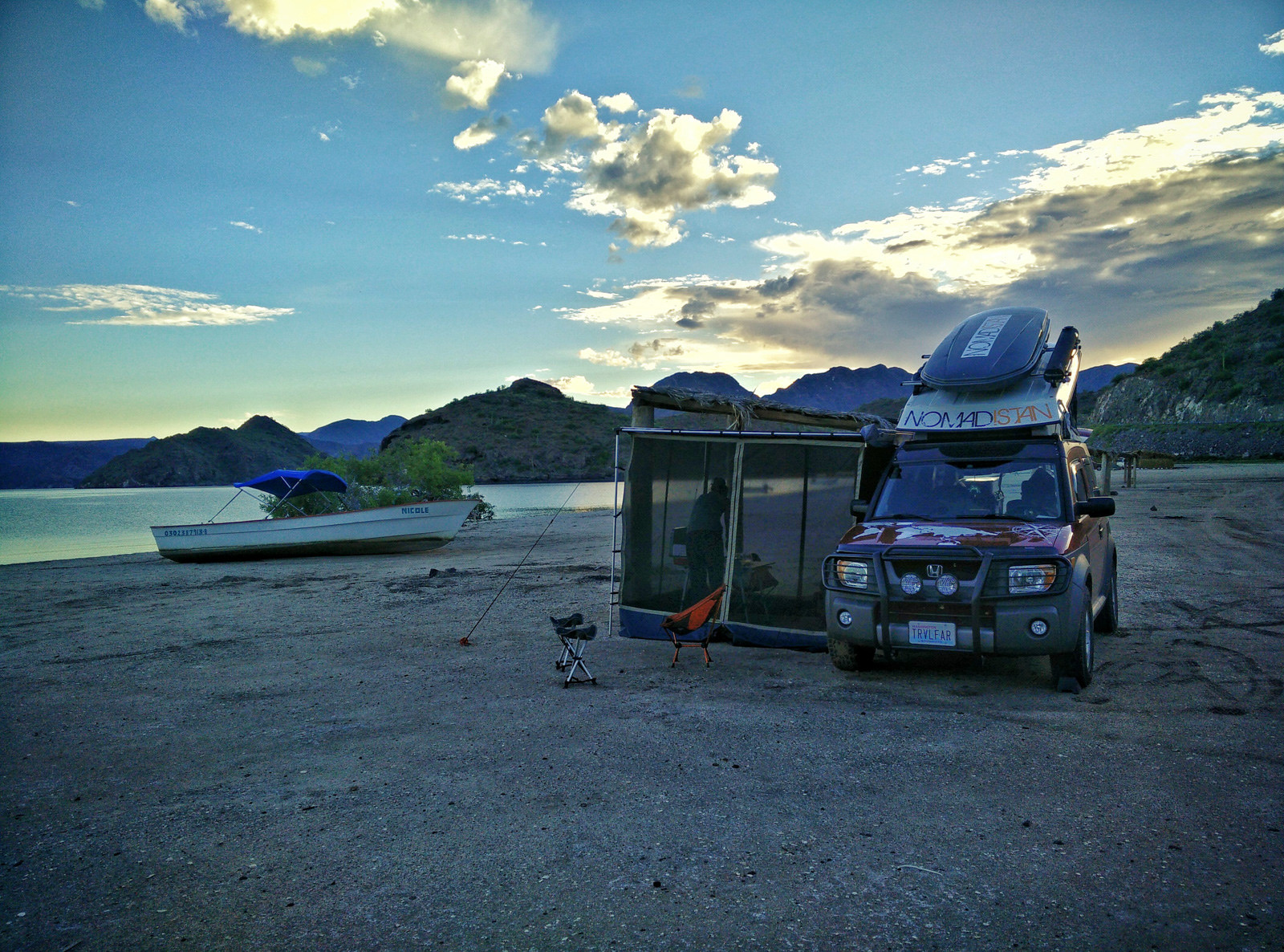 Down, Down in Baja

Memo’s life resembles the plot of a Steven Soderbergh film… only this film doesn’t star George Clooney, Brad Pitt, or Matt Damon. The star of this film is a short, round, boisterous Mexican hotel valet manager named Guillermo, but like all his friends you can call him Memo. Our conversation was born from his knowledge of bird hunting dogs, and his recognition of Sophie as such. For not the first time, nor the last, Sophie played the part of travel embassador well. I found myself chagrinned at my own surprise, silently reminding myself to let go of such bias, when he began his story of growing up on a farm in Mexico, rescuing and raising hunting dogs including a Brittany Spaniel. Having thoroughly captured my attention with this familiarity as well as his enthused and engaging manner, we must have stood there by the Cabo San Lucas harbor for 30 minutes as he wove together stories of working his way north, picking fruit and vegetables along the Pacific coast, including apples in Washington State, truck driving along the same route, perpetrating a drunk driving episode that resulted in a collision and ended with him imprisoned and eventually deported, picking up the pieces of his life and resettling back in Mexico down in Baja to manage a crew of 30+ valet drivers while also building up a portfolio of real estate properties around Cabo to invest with which to fund his daughters’ college educations. Rounding out his business ventures in Baja California, placing him squarely at an intersection of Cabo’s criminal and more respectable business classes, and earning him another nickname – el Cholo Caballero, the Gangster Cowboy – Memo is involved in underground cock fighting and apparently owns a self proclaimed, ahem, champion cock. George Clooney, eat your heart out.

Whether or not I believe every detail of these exciting anecdotes is not important. What inspires me is Memo’s perseverance in the face of adversity. Maintaining a positive attitude during challenging times is a characteristic I am having difficulty cultivating at the moment, and on which I wish to improve. 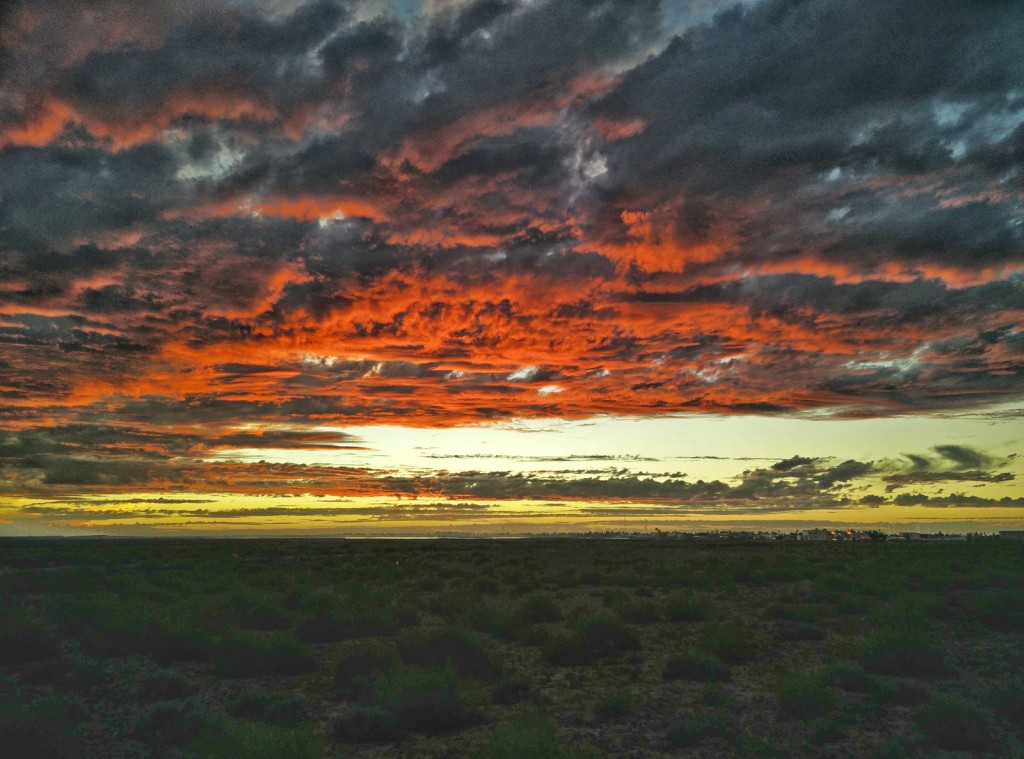 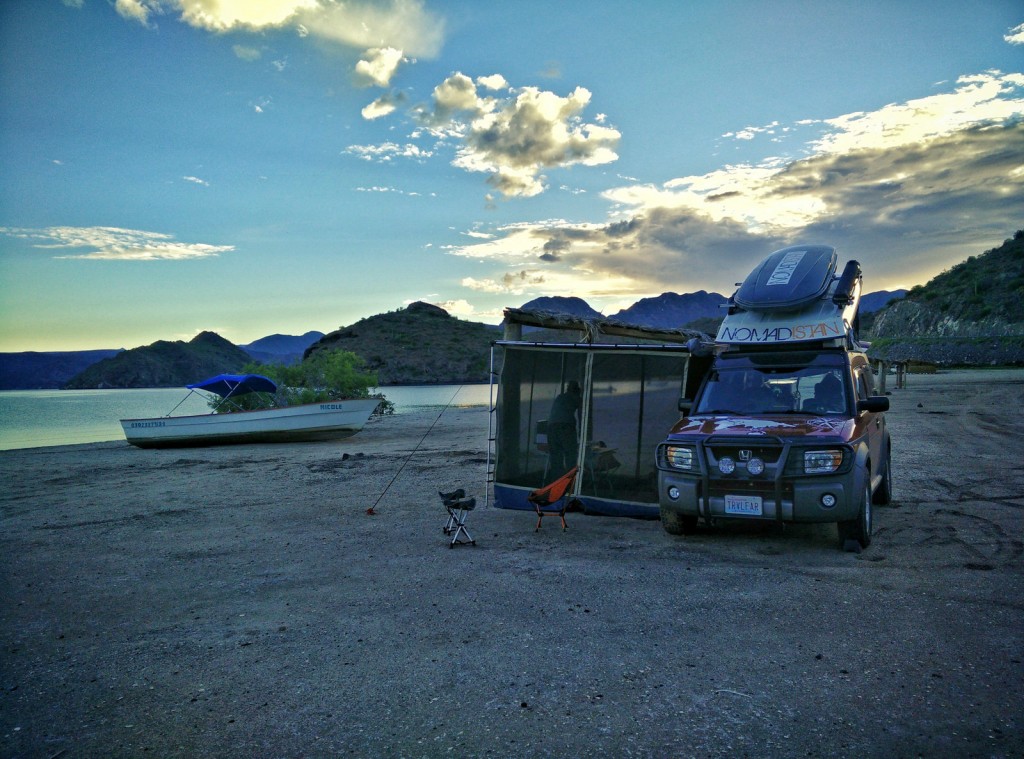 Mostly, this has to do with expectations. Planning for a couple years to embark on a year long adventure, you imagine all the wonderful places you’ll see and experiences you’ll have. You look back nostalgically on travels past, even very lengthy and difficult trips we’ve been fortunate to experience, and remember the glories and triumphs. All of the milestones laid out before you are exciting peaks with picturesque vistas you liked on Instagram and look forward to for months. Friends tell you what a great time they had in Baja! And then, after several weeks on the road, learning the pros and cons of the vehicle you’ve prepared for a year, and how the systems you’ve designed lack an unanticipated detail among the dozens, spending days on the road not filled with excitement, the minor frustrations and personality differences magnified by spending all day with your beloved spouse and dog inside space smaller than a closet, and the malaise sets in… you realise, no, not realise, because you knew this, you remember… every day isn’t awesome. Actually, this kind of sucks. Actually, I’m miserable.

“Oh, but Brian, you’re on a year long vacation you lucky bastard! What are you bitching about?!” Stop right there. This is no vacation. This is something else. This is travel life. Vacations are an escape. This is no escape, this is facing all the regular challenges of life head on, on the road, without your familiar surroundings or safety nets. This is searching for a new place to stay every day. This is the disappointment of days of dusty roads and trucker filled industrial towns like Guerrero Negro. This is camping on Playa Santispak in 95°F & 90% humidity. This is your sick and dehydrated dog. This is finding Cabo San Lucas to be over-Americanized and lacking authenticity. And I haven’t even gotten to the border crossings (because we are not really there yet in our narrative). I’m not bemoaning misfortune. I’m just expressing frustration, as much at my own dissatisfaction as with the actual conditions. Yes, this is a choice, one which many are not fortunate enough to make, and none of these conditions are truly threatening. I’m just not apparently detached enough from my desires to prevent the disappointment of unmet expectations and suffer the frustrations of challenging conditions with unfettered grace. And then I get down on myself for that failure. Ugh, just let it go! 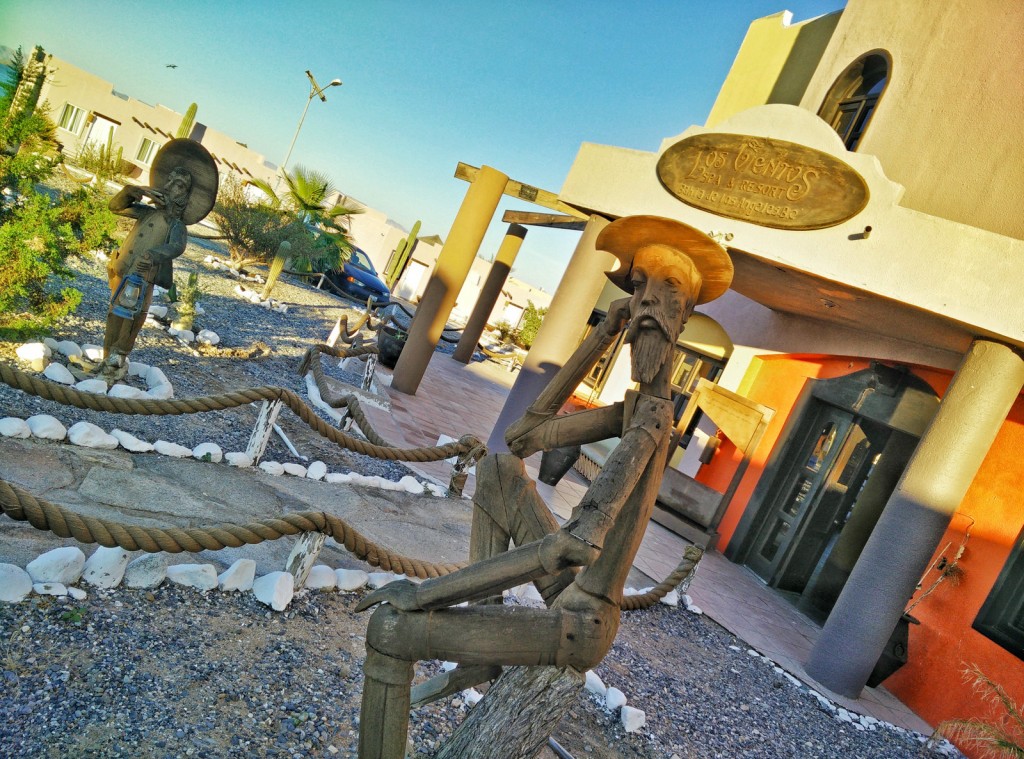 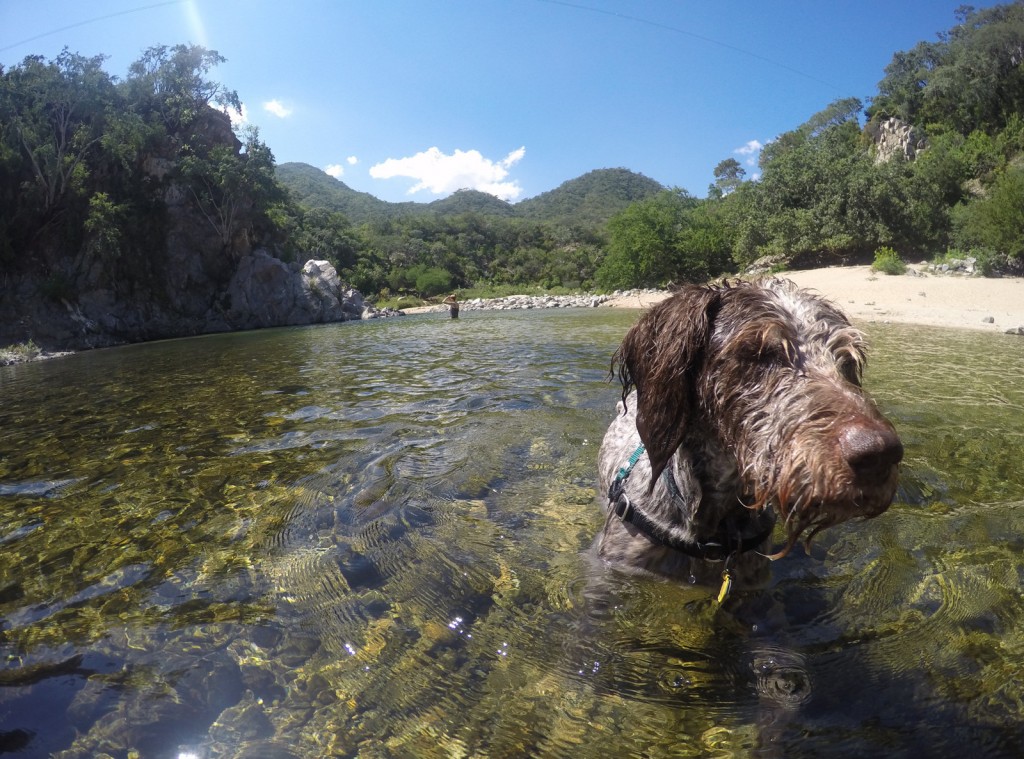 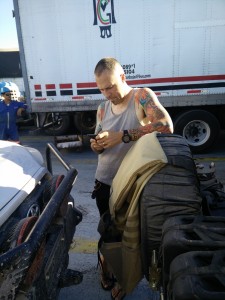 And no, it’s not all bad. Remember the lovely time we had tasting wine in Valle de Guadalupe, and on the beach at Los Vientos? Ahh, yes that was nice. And even in southern Baja we had some great discoveries exploring waterfalls and swimming in natural pools outside Miraflores. And also, finally, we met some fellow travelers with whom to caravan… and commiserate.

Ernesto and Taisa are driving their Toyota 4Runner overland from Seattle to South America, and being from Seattle we really should have already been acquainted. Not merely because we’re overlanders from the same city following a similar route, but 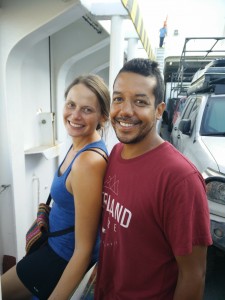 because we have several friends in common and it’s only by chance that we hadn’t already met at a party in the previous year. Thanks to some of these friends, fellow world circumnavigators Brad & Sheena, we were put in contact electronically and made a plan to meet in Baja to navigate the ferry crossing from La Paz to Mazatlan together. So it was that we met at the ferry terminal in La Paz, waiting together for several hours to board the boat. Waiting… lots of waiting. Waiting outside in the sun, talking also with pair of Swiss overlanders, Martin & Franzi in a Land Rover Defender, whom had met Ernesto & Taisa previously and tagged along to investigate about taking the ferry a few days after us. Waiting in the office with sweaty truckers vying for their place on the boat. Watching the clock tick ever closer to the 4pm sailing time. Patiently yet assertively asking if we would be allowed on the boat, despite having made reservation arrangements the prior week. Worrying together that we might not be allowed on and contemplating whether it was a bad idea to take the later evening ferry to Topolobampo which would place us further north in the state of Sinaloa than it was safe to be. Fortunately we did not have to make that decision as we were allowed on the Mazatlan ferry at the last minute before sailing. Rushing to the boat, we backed our way up the ramp and into the last few spots available on the deck where we would set up camp on our roof tops to sleep. But not before climbing up to the top deck to share a meal, drinks, and countless stories late into the night.

When we arrived in Mazatlan the following morning, my spirits were vastly improved. Despite the somewhat rough conditions on rocky seas, sleeping amongst fish filled trucks dripping their ice melt onto the deck, I was already again basking in the glory of travel adventures and newly found friends. Something just clicked. I didn’t know when or where, but I was certain our paths would cross with these kindred spirits again, and that anticipation gave me great comfort and satisfaction. 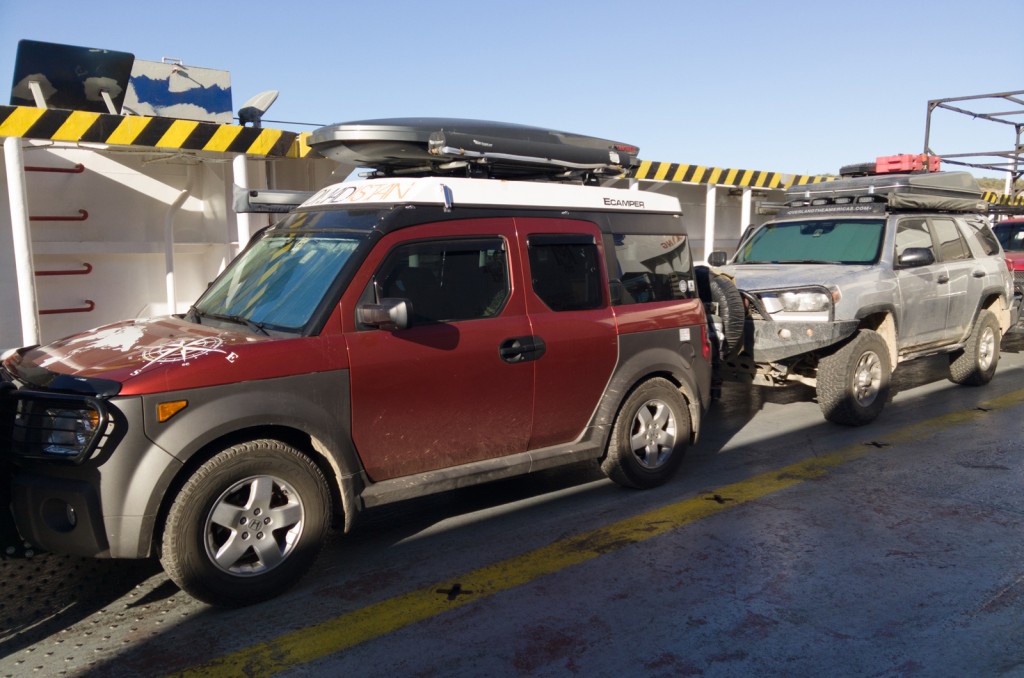 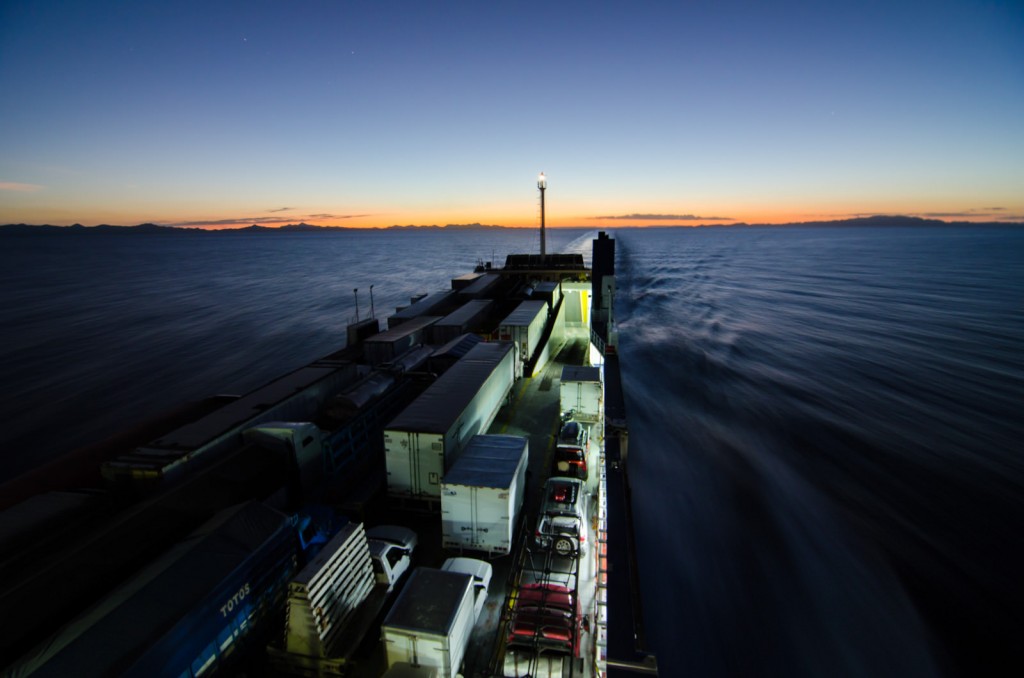